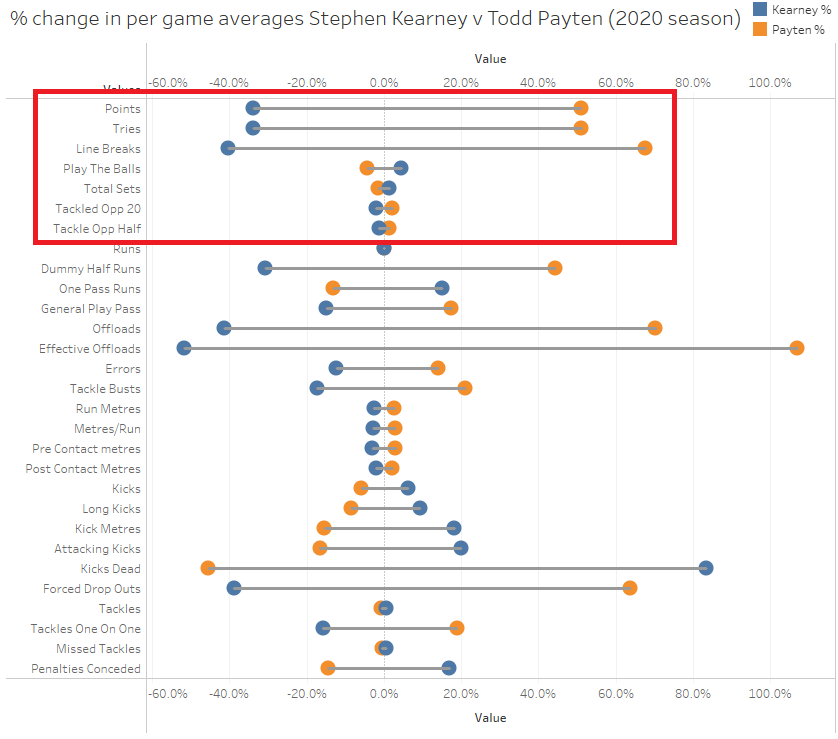 This article was originally posted as part of NRL Round 17 notes and trends, September 8, 2020.

The North Queensland Cowboys announced interim Warriors coach Todd Payten as their coach for 2021 on Friday, and using the Eye Testtm it’s easy to see why. The Warriors have improved on the field under his watch and are showing a lot more enthusiasm and commitment, even after a coach they supported was removed. Their fightback against the Eels showed a desire that Warriors sides haven’t shown late in a game for quite some time.

This led me to have a look at what changed under Payten and how the Warriors improved under his tenure by looking at the teams per game statistical averages under Kearney compared with Payten’s performances.

First up I’m going to qualify everything below with a small sample size disclaimer – we’ve got six games for Kearney and eleven for Payten to analyse. These aren’t representative, more they are indicative of their performances, but within those games there are hundreds if instances of runs and tackles which gives me some comfort. It’s not like I’m writing an article purely on the win/loss percentages of teams where one win or loss would throw out my premise completely. But I digress.

Below is a chart of the percentage change for a number of statistical categories for the Warriors in 2020, with te blue dots represent the percentage difference between Kearney and Payten, and the orange dots represent the difference between Payten and Kearney. The further the circle is to the right or left, the larger the difference. Whichever colour sits on the right-hand side shows which coach had an advantage in that area, and at first glance you can see by the number of organe points on the right hand side that Payten has outperformed Kearney in the majority of these statistics.

I wanted to note that I’ve chosen percentage change because on a per game basis it’s hard to get a scale that fits average total run metres in the thousands (1400m+) with average metres per run in single digits (8.5-9.0). Otherwise it would be impossible to see some of the changes. Another reason, which if you’re becoming familiar with my posts you’ll know, is that the exact number isn’t as important to me as the size or direction of the trend. I’m looking for how much things have changed under Payten.

WIth that out of the way, let’s delve in a bit deeper to the differences and start with the first line for points scored per game – the orange dot on the right shows Payten had an increase of nearly 50% in points scored per game, with the Warriors going from 12.2 under Kearney to 18.4 per game under Payten’s stewardship. Looking at from the other perspective, the Warriors scored 34% fewer points when coached by Kearney in 2020.

Tries and line breaks were also up significantly under Payten, whilst a possession statistics like play the balls and total sets were down between 1-4%. From this group of stats, you can see that not only were Payten’s Warriors scoring more, they were doing so with less possession. That is countered by the fact they had slightly better field position, as play the balls inside the opponents half and opponents 20 metre area were up 2% and 1% respectively.

The next set of stats I wanted to focus on were runs, run metres and passing. Both teams averaged the sane number of runs (168 per game), which makes a fantastic baseline to use.

There was no change there from a quantity point of view but it’s very clear they’ve changed how they were running the ball, and its effectiveness. The first is that dummy half runs were up 44%, from 7.5 to 10.8 per game. One pass runs, your standard hit up, were down 13% under Payten, whilst general play passes were up 17%. The increase in passing wasn’t just mindlessly throwing the ball around either, as offloads increased dramatically after the coaching change, with nearly 70% more total offloads (6.7 to 11.6) and a triple figure percentage increase in effective offloads.

This would suggest that he has given his dummy halves more freedom, allowing them to skip out of the ruck and engage the line before spreading the ball wide, and the increase in passing stats shows they were playing a more expansive game compared to the safe conservative style under Kearney. He’s also unlocked their ability to promote the ball with offloads as well. Given these changes it is not surprising that they may have scored the try of the year against the Eels on the weekend.

Although as you’d expect, moving the ball around more often did create more errors, which increased by 17%, similar to the increase in passing but that’s just the cost of doing business to improve a teams attack.

On the run metres front, it’s a blanket increase of 2-3% under Payten, and the increases to Post Contact Metres could indicate players increasing their effort as they hit the line and trying to push through initial contact.

Finally, I wanted to look at how their kicking changed, which has seen a drop under Payten in total kicks and kick metres. This lines up with the above changes, showing the team passing the ball more and in better field position, reducing the need for long kicks (or kicking the ball at all) to end a set. Total kicks are down nearly 6% And when they were kicking, they are doing so more accurately and effectively – fewer kicks dead (down 45%) and more forced dropouts (up 63%).

Things have also improved defensively for the Warriors under Payten as well in a few key areas. Total run metres conceded are down 6.7%, post contact metres by opponents are down 9% and offloads have dropped 8.4%. Clearly Payten’s Warriors are putting more effort in defense, reducing opponents gains after contact, and wrapping up the ball carrier more effectively.

And Payten has achieved all of this with a similar line up to Kearney. If anything, you could argue he was dealing with a weaker hand – Ken Maumalo, David Fusitu’a, Agnatius Paasi and King Vuniyayawa all returned home mid-season. They were replaced with loan players like Jack Hetherington, George Jennings, and Daniel Alvaro, who have been fantastic additions but came without knowing the structures and combinations the departing players already understood. Despite these issues, their discipline has improved with 15% fewer penalties conceded per game.

The fact that he has been able to squeeze this extra performance out of a squad with significant challenges living away from their families is incredible. Next season he’ll inherit a stronger Cowboys squad that desperately needs a new direction and an injection of belief and creativity. Payten has shown in just 11 games so far this season that he’s just the man to deliver all three, and it’s encouraging to see North Queensland give him a chance instead of giving a problematic and divisive former coach another run around.