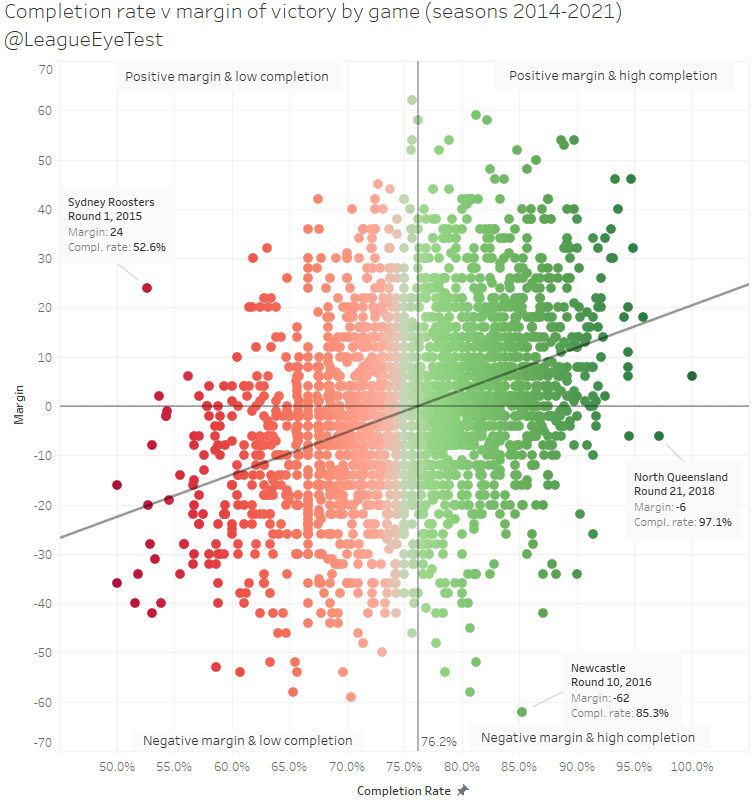 There was a lot of talk in Round 6 after the Warriors beat the Dragons around completion rates, as it looked like the New Zealand had finished the game with a 100% completion rate, a rare occurrence. The NRL later downgraded them to 40/41, although Fox Sports still has them at 40/40 for that game.

Either way it was the highest completion rate in a game since at least 2014 and probably earlier, a mark that used to be held by North Queensland (we’ll come back to this later). Commentators will often talk about high completion rates during games as a barometer of success.

This got me thinking, is there a relationship between completion rate and margin of victory? Are teams that complete a high number of sets more likely to win, and if so, do they win by a larger number of points? Is it a myth that you’ll win more games if you maintain possession?

My starting point was to look at completion rate plotted against margin in every game since the start of the 2014 season. The results of this are below, with the data points shaded for completion rate – red is 50% and green is 100%. The chart is also divided into four areas by either high/low completion and positive/negative margin to make it easier to identify who is winning with high or low completion rates.

From the chart you can see that there’s an even spread between all four quadrants, with a trend line through the middle which shows that the correlation between completion rates and margin isn’t that strong, although still positive. The strength of correlation (on a scale from 0 to 1) is about 0.13, which is pretty weak. To put that number into context, the strongest correlation with winning are tries (0.61) and run metres (0.4).

To highlight just how little a high completion rate can mean on a game-by-game basis, you can see that I’ve singled out three matches on that chart. The first is the Sydney Roosters in Round 1, 2015, who completed less than 53% of their sets in a 28-4 victory over North Queensland. The other, was the previous high mark that I mentioned before held by the Cowboys, coincidentally also in a loss to the Roosters, where they completed 35/36 sets before losing 26-20.

By now you can see that there’s a weak positive relationship between completion rates and winning, and that results in individual games can vary wildly in both directions with a high completion rate. Another example I’ve drawn attention to is in Round 10, 2016, where Newcastle completed 85% of their sets, but still lost by 62 points.

Thus far we’ve looked at individual games. Does this low correlation also extend over a longer period of time? If anything, it’s an even weaker positive correlation. Below is the season completion rate and margin for each team since 2014.

I’ve highlighted each grand final winner over the past seven seasons as well to further demonstrate the disconnect between completion rate and wining. Both Sydney Roosters titles in 2018-19 were won with below average completion rates, both in the 72-73% range, well under the NRL average of 76.5%.

It is also worth noting that the 2014 Roosters hold the lowest completion rate over this same period at 69.2%, in a season where they were one win away from a grand final berth. Here’s the same chart again with only the Roosters seasons highlighted, showing how they’ve historically been a low completion rate club, something that friend of the site Jason Oliver has noted previously.

This highlights that completion rates are more a factor of coaching philosphy than abiltiy. High completion rates are a sign of discipline but also a sign of avoiding risk. The Roosters have been happy to spread the ball, push extra passes and take risks because they understand the reward available, but also back their defense if they do give up field position from an error.

The conservative approach is epitomized by the last few seasons from Canterbury, who (especially under Dean Pay) played a very safe brand of football, trying to minimse their errors and prevent teams from having easy field position off a turnover. Here’s the chart of their last seven seasons showing their completion rates and margins.

As we all know, it hasn’t really worked. In fact, the last four seasons they’ve been completing at least 78% of their sets, much higher than the NRL average. And each of those seasons has resulted in them finishing with a negative point differential and teams that stuggled to put points on the board.

Given the above analysis, what does completion rate demonstrate then? Other than committing fewer errors and the ability to hold the ball, not a lot else. Field position is far more important than possession, which we’ve seen this season with the plethora of set restarts on the first tackle.

One statistic completion rate correlates best with is kick metres (0.21), which again shows that a high completion rate doesn’t necessarily equate to positive rugby league. If you’re consistently gaining more kick metres, you’re most likely sitting in your own half.

The other thing to keep in mind, especially with the Warriors high completion rate in Round 6, is that completion rates have trending up since 2014. Here’s the last seven years for the opening eight rounds (comparable rounds for 2020).

Completion rates in a set restart world are higher for two reasons. The first is that a set restart being awarded means the previous set is marked as “complete”, the same way it would be for a penalty. The second is that as we’ve discussed many times before, the restarting of tackle counts means teams continue to run basic hitups through the middle, a run type that bears little risk.

There are obviously in game situations where completing sets is a priority, such as protecting a one or two score lead with the clock winding down, or during the opening minutes of a match to ensure you don’t start on the back foot. However a broad “must complete sets at all cost” approcach isn’t likely to result in more or larger victories, just fewer risks taken.

The number of set penalties has been relatively constant over the past three rounds (68, 65, 67) at around eight per game. There has been a drop in set restarts though, from 77 in Round 7 to 57 in Round 8, which is a substantial drop from 9.6 to 7.1 per game.

When you break it down by half, there’s also a new trend emerging. Set restarts awarded are declining in the second half, with the equal lowest average of the season at 2.1 per second half, down from over 3 per half in the previous two rounds. During that time, penalties awarded in the second half are up to over 4 per half.

What happened in Round 8 to cause this drop in set restarts awarded? The below graph shows why.

It is interesting that with the barking from the usual suspects for referees to call more penalties and there’s too many six again calls, they’re already doing it.

The most prolific offloader no one talks about

Regular readers will know that it doesn’t take much for me to talk about the output of Eye Test first ballot Hall of Famers Christian Welch or Daniel Alvaro. I’ve mentioned numerous times how Welch is one of the hardest working players in the game, but over the past few seasons it’s another aspect of his game that has drawn my attention.

Welch is in the 99th percentile for forward offloads in 2021 so far, with 22 offloads and every one of them effective. This is up from sitting in the 93rd percentile in 2020 and 85th percentile in 2019. Here’s his radar chart for 2021 compared to the best offloader in the NRL from the past few seasons, Brisbane’s Tevita Pangai.

Welch isn’t the the offload king (yet), but out of 176 forwards who have played so far in 2021 only Pangai (24 offloads, 22 effective) sits just above him on a per game average.