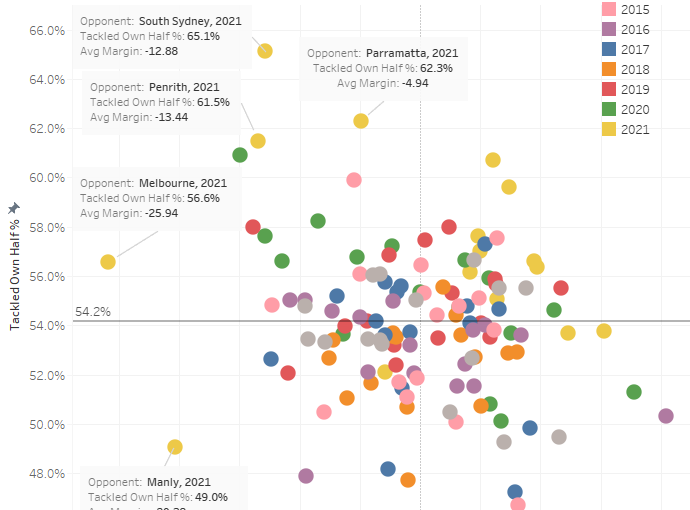 No set restart data to talk about this week, I promise. I need a break from it anyway. Just a few quick updates on some things we looked at earlier in the season.

Time in play continues to decline

One of the things that the NRL like to keep going on about this season is how successful the rule changes have been, how there’s fewer stoppages, scoring and tries are up, and everything is peachy keen.

There might be fewer stoppages but time in play continues to dwindle, because as we’ve explored before the process of scoring points itself creates more stoppages. As Dogs fans will tell you, there’s nothing happening whilst you’re standing in your own in goal area waiting for a conversion attempt.

Here’s a round by round view of time in play (blue columns) with a three round rolling average time in play above in orange for the past two seasons. We’re approaching two minutes lost (55.9 to 54.2 minutes) of ball in play since last season.

Almost every round since Round 6 has been right on or under the season average. To get an understanding of the relationship between tries scored and time in play, the next chart shows the average number of tries per game for the last three seasons by round. The blue columns show average tries per round, with time in play plotted above it shown as the orange line.

To further illustrate just how points scored reduces time in play, below is a chart of the total points scored and time in play from every game this season, and you’ll notice the trend line getting lower as more points are scored.

The R squared of the above chart of points against time in play is 0.45. What’s R Squared? I’ve explained it before, but for the new readers it’s basically a measure of how close the data is, and the higher the number the better, and falls between 0 and 1 (or 0% to 100%). This one is falling right in the middle.

How has that changed with the new rule introductions? In 2020 it was 0.33 and in 2019 it was 0.16. So not only does scoring points have a strong correlation with lower time in play, the correlation is getting stronger, tripling in two seasons. Part of that is due to the massive increases in one sided scores, with Melbourne breaking all sorts of scoring records.

At some point they’re going to need to decide whether they want a fast flowing one sided game with plenty of tries or a low scoring well matched contest with minimal stoppages. You can’t have both, they’re mutually exclusive.

How Melbourne and Manly differ on field position

Another thing the Eye Test looked at earlier in the season was play the balls in certain parts of the field and how some teams were doing a fantastic job at controlling where possession occurred.

Let’s have a look at the update after Round 22, plotting average margin and percentage of play the balls inside their own half by opponent. You can see there’s still some huge outliers compared to previous seasons.

Even with their horrific slump, Parramatta still hold opponents to 63% of play the balls inside their own half, and Penrith aren’t that far behind at 61%.

There is a change at the top though, as Melbourne have dropped below 60% (barely) to 59.8%, while Souths have rocketed up to 63%, indicating they’re doing a better job at controlling their opponents field position. Melbourne still has the outlier for points scored, with teams facing them losing by over 23 points per game.

You’ll also note I’ve marked another point in the chart this time – Manly.

The Sea Eagles have been on a tear since Round 6 when Tom Trbojevic returned and if you look at the numbers over that period of time (Rounds 6-22), they’re comparable with the Storm for margin, winning by an average of 20.4 points per game. I’ve filtered the same chart above for rounds 6-22 below.

The big difference is where they allow possession. As we noted above, the Storm like to control opponents in their own half, and even from Rounds 6-22 they’re still holding opponents to 56% of play the balls inside their own half, down from nearly 60% for the season.,

Going back to where that 49% of play the balls inside opponent’s halves, sits historically, there’s only been a handful of sides with a lower percentage than Manly this season. Three of them came from the Canberra Raiders (2016-2018) and the 2015 and 2017 Gold Coast Titans. Not exactly elite company and it’s very rare to see teams allowing over 50% of their opponent play the balls in their own half, especially for contending sides.

I guess when you have Tom Trbojevic on the field it’s almost irrelevant where your opponents are playing the ball. It will be interesting to see if Manly can make a run in the finals whilst giving up the same level of field position.

Lastly this week we’re going to check in on Error rates for NRL players this season. What’s error rate? Simply put, it’s the number of possessions needed for a player to cause an error. Here’s the worst players this season with a minimum of three errors. Generally, anyone with an error rate of under 15 is pretty bad and under 10 is terrible.

Tigers rookie winger and cult figure Zac Cini takes top spot here, with an eye watering seven errors in three games, one every 5.7 possessions. There’s probably a reason why Michael McGuire hasn’t featured him much since his debut earlier in 2021.

Brent Naden from Penrith and Jordan Pereira from the Dragons round out the top three, with rates of 7.1 and 8.1 respectively. On raw volume terms, Naden’s 12 in five games is giving Cini’s seven in three games a scare though.

Most of the players inside the top ten haven’t played regularly this season. If you look at players with at least 10 games played, the Warriors Jack Murchie would fare the worst with 8 errors at a rate of one every 8.3 possessions. The Roosters Matt Ikuvalu has a bit of a reputation among Roosters fans as having a case of Burgess hands, with 22 errors in 13 games at a rate of one every 11.5 possessions.

Along with Naden, the Panthers have two other players inside the top 13 with rookie Izack Tago (8.5) and Viliame Kikau (11.6). Kikau’s number is probably more concerning for Penrith given the number of minutes he’s played and how many touches of the ball he’s had, especially in attacking situations.